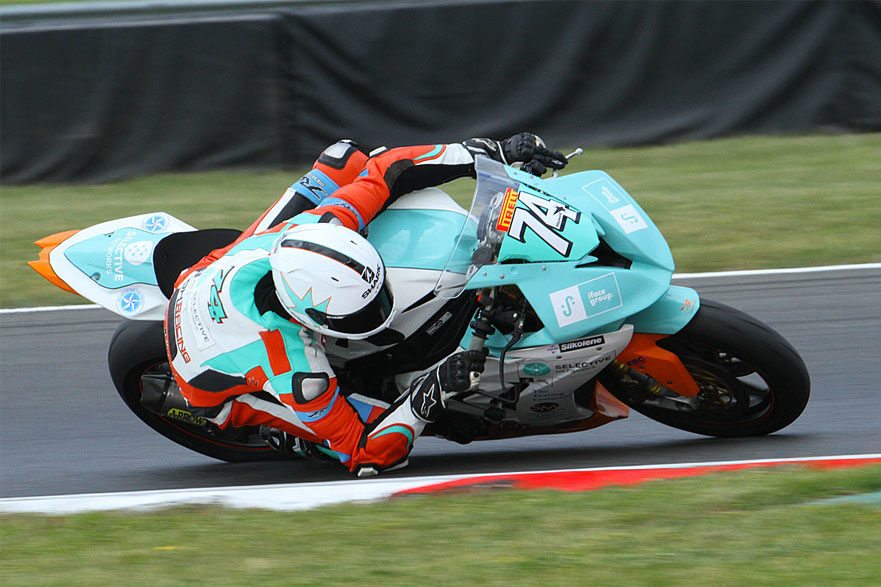 Snetterton was round three for the Selective Networks BMW team within the British Superstock 1000 championship.

The weather forecast looked good and consistence for the weekend so the
hopefully we could catch up on the competition who had previously tested at the track.

FP1 was the first time out on track on Friday, we used a new front tyre and rear tyre to try and get up to speed as soon as possible, and if anyone who came
passed I had the grip to maintain their pace, we ended the session with a 1.53.5 on lap 9 of 11, down in 20th place.

FP2 started and we was having issues with the front end feel of the bike, the front was very ‘bouncy’ when entering the fast turns, some general suspension changes during the session didn’t help bottom out the problem. Finishing the session down in 23rd position.

Qualifying was the only session of the day for us on the Stock 1000 class on Sunday, the session started with some front suspension changes made over night, this changes seemed slightly better but not a drastic improvement, when coming into change to a new rear tyre the front brakes was sticking on due to overheating, this was causing the front wheel to lock when the bike wheelied, not a good session for the team.

After a de-brief from the qualifying session we decided to make a few changes to the front and rear as we still had issues with the front feel and felt that rear stability could also be improved.

Race day’s morning warm up was a better direction for the whole team, the bike was working better and I lapped faster than I had all weekend on old tyres and in the morning warm up.

A similar direction with the suspension was continued for the race in the afternoon.

The race started and I was feeling confident after the morning warm up, had a great start, and lap one, up to 15th position by the end of the first lap. By lap 7 I had got up to 10th position and feeling confident on the bike, after this lap the front brakes started sticking on again, resulting n the front wheel locking up when wheeling! This meant I dropped back a few places and ended the weekend in 12th place. Still a good result considering how the weekend had
gone.

The next round of the British super stock championship is a Knockhill in Scotland, we haven’t been there on the BMW before but looking forward to trying the track on the bike plus the track has been newly resurfaced.

We would like to thank all our sponsors and supporters for getting us onto the grid this season! Without them we would be there at all!