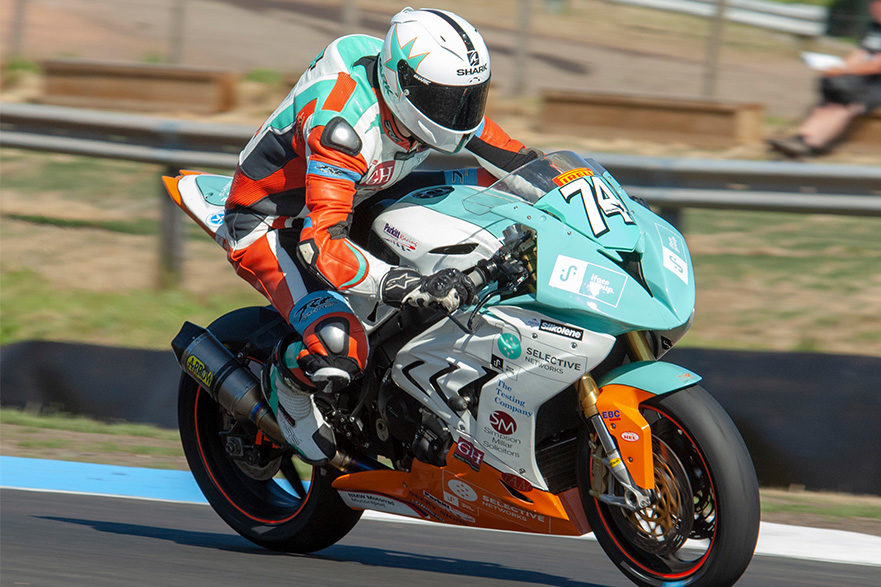 Kncokhill in Scotland was round Four for the Selective Networks BMW team within the British Superstock 1000 championship.

The weather forecast looked good and consistent which makes a change for racing in Scotland! Normally we’ll have at least one wet session, we even took the wet tyres off the rims.

FP1 was the first time I’ve been to Knockhill on the BMW, also the track had been newly re-surfaced since last time I rode, the track seemed better with the bumps less proud, finished the session in 18th position. Some changes to be made since learning the track on the BMW.

FP2 started with the gearing changes made and some front suspension modifications, ending the session with my personal best lap time around the Knockhill track and in 15th position, still not 100% happy with the set up so changes would be made overnight for the qualifying session.

Qualifying was one of the two sessions on track on Saturday as we had race one a bit later in the day, only 2 hours after qualifying so preparation was done on the spare wheels to ensure they were ready for the race. Qualifying didn’t go to plan, ending the session in 22nd position, work to be done for the race.

The race in the afternoon started badly with me getting a poor start and being as low as 26th on the first lap, I made my way through the pack to get up to 16th, with some riders crashing in front ended the race in 16th but my mid-race pace was good enough for around 12th.

For morning warm up on Sunday we made drastic changes to the bike in order to find the time we were missing, this resulted in a warm-up time that nearly matched my race and qualifying time.

Race two started and I maintained my position by the end of lap 3, after a few more laps I moved into 17th position before the gear lever peg broke off! Meaning the bike was stuck in 5th gear, resulting in having to pull over and retire from the race.

Luck didn’t appear to be on our side during the race at Knockhill as the pack I was in a battle with finished in 12th position, should have been some more point for the team.

The next round of the British Superstock Championship is at Brands Hatch in Kent, a track which is always very tight on times and we will have to push to get a good result, the meeting also has a ‘100’ mile race which will be interesting for arm pump.

We would like to thank all our sponsors and supporters for getting us onto the grid this season! Without them, we would be there at all! Please take a minute to look at their website’s, support the people who support our sport!